Notes and Observations From 4-Team Scrimmage at Byron Center

The 2021 high school football season is only a week away as teams across the state are getting in their final reps at fall camp before game week arrives. Last night, I dropped in at Byron Center for a four-team scrimmage between the host Bulldogs, Rockford, Portage Central, and Wyoming. Below are some of my takeaways from the scrimmage.

Zak Ahern Picks Up Where He Left Off From Last Season

Rockford's senior signal-caller made a number of plays with his arm and his feet last night, flashing a level of athleticism that helped the Rams reach the Division 1 State Semifinals in 2020. One play that stood out was a quick slant across the middle of a crowded Byron Center secondary for a Rockford touchdown. Zak saw a favorable matchup and put the ball where only his receiver could make the play. Zak also showed off his elusiveness on a number of scrambles and designed runs last night. His versatility and ability to make plays in both facets of the game are reasons why he'll be one of the top prospects to watch at quarterback this fall in West Michigan.

The Bulldogs are coming off an impressive two-year span where they went a combined 15-3, winning conference championships in the OK White and OK Green in back-to-back seasons. Unlike the previous two seasons, the Bulldogs feature a ton of youth this year and will need to lean on younger guys to step up in order to achieve the level of success they've enjoyed in 2019-20. One senior who made a number of plays last night was wideout Nathan Wieber. Wieber flashed sure hands and the ability to create separation. In this clip, Nathan makes arguably the catch of the evening between two Rockford defenders. His ability to secure the ball through contact was equally impressive.

The Mustangs are coming off an up-and-down season that included a three-game winning streak and a four-game losing streak in 2020. Last night, the Mustang's energy and effort showed the potential of being a calling card to success. On multiple occasions, Portage Central's defensive line dominated the line of scrimmage and disrupted the opponent's play in the backfield, leading to a negative play for the offense. Offensively, the Mustang's skill players made plays in the open field, turning a loss into positive yardage. 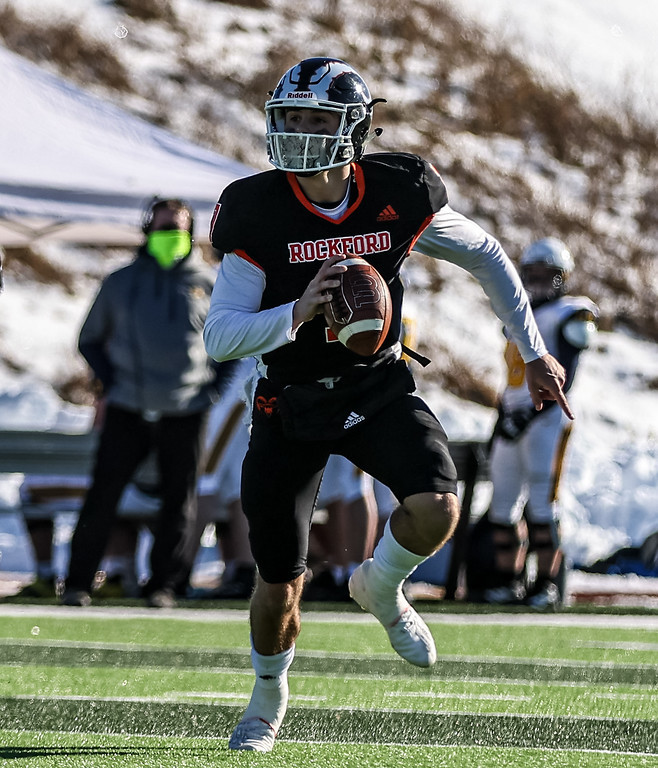