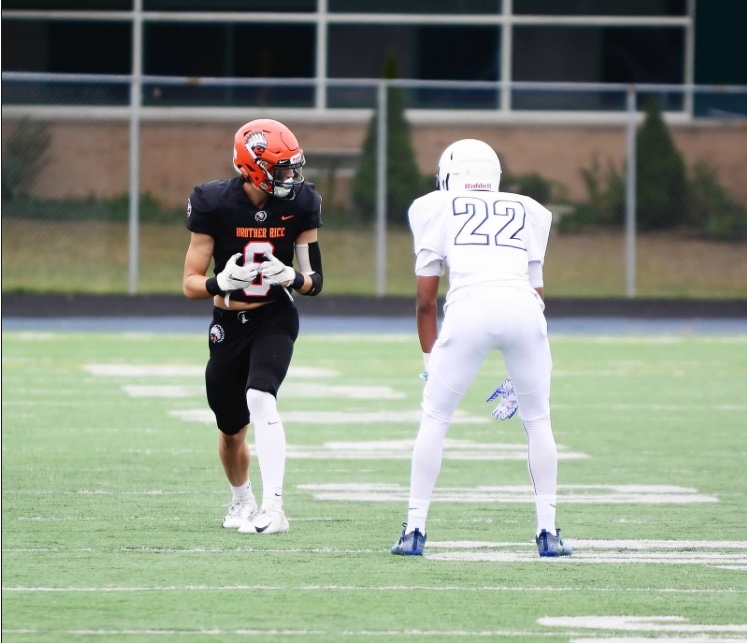 What separates me from other players on the field is my dedication, commitment, and love for the game. I am a very hard worker who will not stop at anything but success. As a junior I still play a key role in leadership. On the field I lead by example and am always telling my teammates “focus on the next play” and always keeping there heads held high. i am always keeping my teammates confident. I’m the guy on the team that players go to for “motivation”. I will do anything to win. I hate losing, more then I like winning. I will not except failure. Every Friday, I go into games thinking “play every single play like it’s ur last” and that keeps me working harder and harder everyday. During practices I am focused, locked in, and paying attention to any mistakes or lessons I can learn of off. Not just with me, but with other players to so I can learn from there mistakes. I am always going back to my craft and fundamentals to makesure my footwork is right and that my routes are crisp. I have wanted to play D1 College football my entire life. I have been talking about playing on the big screen sense I was 4 years old. My mindset has never changed. I have grown up with a lot of doubters, and people who say I can’t do it or can’t be the best or won’t go somewhere and that is what has made me the man I am today off the field, and the beast on the field.. I will do anything for this game. I love And cherish this game.

I am a very easy player to coach. I follow directions when asked the first time. I am very smart and always thinking about what I could of done better to make the team better. I am very aggressive. I don’t let players talk down to down to me from other teams. I don’t retaliate with words to get penalized, I retaliate with being the most aggressive, hard hitting kid on the field. I do it with my pads not my words. I get along very well with my coach’s and other coach’s I have had in the past. I’ve been a captain on all my old teams and I hope to be one my senior year. Coach’s do not have trouble getting my best effort, and the best of my ability everyday. I’m an emotional player who loves the game so much at heart.

My outlook on my high school experience has been good. I was at De la Salle my freshman year and had one of the best records for freshman level, and then I transferred to brother Rice high school as a sophomore and was on varsity. I’ve enjoyed all the new people I have met between the 2 schools, and I’m so blessed to of been able to get the opportunity to go to these schools. My goals for this upcoming season is to be a captain, lead my team to win a State Title, win the catholic league title, and to make every player on my team a better player and person by pushing all of us harder to be successful. My personal goals are to win all league, all catholic, and hopefully all state. My plans for the future, like the off season, is to work at Rising Stars with Reggie Wynn’s and to be at all of there training sessions, and to make the 7v7 team. I am also working with Chris Huff who has experience training many many D1 athletes including Donavan peoples Jones, Donnie Corley, Reggie Pearson,many king and Cass tech players who went on to play D1 ball, many Michigan football players, and also many D1 athletes from all different sports. I also will be doing my own workouts and my own speed and agility work at other gyms, on the field, at a park, really wherever I can get a lot of space to do many different drills and sprints and conditioning. My accomplishments are being a captain on all my football teams growing up my whole life (well always playing up a year so I was the youngest kid ) always started both ways and on all special teams my whole life. I won my leagues “player of the year” award in 8th grade, I have won 6-8 championships in the league I played in,freshman year I was on the honor roll at De La Salle. I also played baseball my whole life until I wanted to stop and focus on football. I played all over the country in the biggest tournaments in the state and on one of the highest, most competitive teams in the whole country. At age 10 we were #1 team in the Midwest, at 11 we won the Midwest tournament again, at 12 we came in 16th out of the top 104 teams in the country. From 11-13u my team was ranked #1 in Michigan for baseball.

I would love to play football at the next level more then anything. That has been my goal sense I was 4 years old. The thought of playing on saturdays gives me chills and fires me up to work harder and harder. What I would want a coach to know about me is I will not ever quit or give up on you or the team or myself. I will never disrespect a coach, or one of my teammates, I only bring positivity to the team, and shutdown any negative things or comments. I am so emotionally overwhelmed by this game and literally give it my all. I put my hesrt and soul out on that field every Friday night. I don’t take plays off, and I never want to come out.i takecthis gamd very very seriously

If you are Ben Sacco, you may request access to edit and maintain this profile.