Michigan Collegiate has had plenty of success in recent seasons, in the past two years the Cougars have a 22-3 record, reaching the semi-finals and regional finals. Although Michigan Collegiate will be losing some key players to graduation this season, the Cougars happen to return one of the state's most gifted athlete's in Teo Redding. Redding was able to look back and share his thoughts on the previous season as well as look ahead to his future endeavors.

First Game Started: First game I started was against Ecorse my Freshman year at WR and Safety on Varsity.

#1 Most Memorable Game: Most memorable game is against Our Lady of Lakes in the regional championship we were down by 12 going into halftime and came out the 3rd quarter and scored on the first play, then stopped them on defense and scored again. We won 24-12.

Pre-game Traditions: Before every game we always meet at the school and eat a team meal. Then watch I am A Champion Speech before leave.

Post-game Traditions: We do our traditional break down M.C Ohhooo.!!!

Athlete you try building your game around: I try to build my game around Jerry Rice and Calvin Johnson. I like to build my game around Rice because he is quick and runs precise and smooth routes and he is an NFL hall of famer, one of the best to ever play wide receiver if not the best. And Calvin Johnson because he has speed, strength and the ability to leap up and get the ball over any corner and is a future hall of famer. And I like to leap up and get the ball too. I also want too be in the NFL and become the best wide receiver.

Teo Redding - "Yeah I agree we had a great season last year. But to take it to the next level this year we have to work harder, become closer as team, and play as team instead of all individuals."

The D Zone - What was something that you improved on during last season and something you want to improve on during 2012?

Teo Redding - "Last season I improved on my jumping ability, running routes better, and also I got faster. This season I want improve on speed, strength, size, more route running, and blocking ability.

The D Zone - If you had to describe the type of player you are, what would you say?

Teo Redding - "If I had to describe myself as a player I would say I am a sure handed receiver, has the ability to jump over corners, make tough catches, and a player that loves to play Football. Very hard working and competitive football player also the best wide receiver in the Midwest.

The D Zone - Was there a moment last season where if you could go back in time and do something differently, what would it be and why?

Teo Redding - "Last season if I could go back in time and change something different. I would want to go back and change those last 40 seconds of the Ecorse game in the playoffs. I would change that because we could have won that game and would have been playing in our 2nd straight semifinal game, I could have made it to Ford Field!"

The D Zone - I would usually ask what the biggest game is for 2012 but I know you will say Chandler Park. How tough is it playing Chandler Park, knowing that the winner of this game, takes the title for the Charter School League?

Teo Redding - "Wow the Chandler Park game is a very tough game because it is for The League Championship and The Eastside Hardhat. The Eastside Hardhat is a trophy for all of the bragging rights. The game is full of energy and both sides are very crowded. It is a rivalry game, this is the game that has everybody anxious to play. So when we play them we try to leave all we have on the field. Because nobody wants to lose that game. Because it would be a painful loss."

The D Zone - Have you been to any camps so far this season? If so, how do you think you performed?

Teo Redding - "I have went to the Maximum Exposure Camp, Nike Sparx Combine, The Best of The Midwest in Indiana, and The Adidas Best of the Midwest Invitational. At all these camps I have had great performances. I received the M.V.P for the wide receivers at every camp I went to this year. I also finished in the top 50 at the Nike Combine.

The D Zone - Any other big events coming up this Spring/Summer?

Teo Redding - "I am going to be going to MSU, Michigan, Indiana, Bowling Green, Toledo, and Iowa football Camps. Im also going to Pittsburgh for a 7 on 7 and The Sound Mind Sound Body Camp.

The D Zone - Can you summarize the recruiting process so far you?

Teo Redding - "The recruiting process is going good for the most part I am just waiting for my first offer. I have been receiving letters from MSU, Iowa, Indiana, and Bowling Green. Schools that have been showing interest are MSU, Bowling Green, Iowa, Indiana, Toledo, Central Michigan, Ball State, Western Michigan and Notre Dame. MSU, Iowa, Bowling Green, and Toledo are showing the most interest. My first offer might come from one those schools. I have been down to BG and MSU for junior days. I went to Toledo's spring game and I went to BG for a spring practice."

The D Zone - How did you enjoy the Toledo Spring Game and were you able to kick it with other Michigan kids in the class of 2013?

Teo Redding - "The Toledo Spring Game went good. I got a chance to see their players and coaches. I also got to see how they ran their offense and what type of team they are. I talked to a few people from Michigan, Demetrius Stinson and Alton Yarbrough. I actually rode up to Toledo with Meech. So we had a good time just seeing if we could we see ourselves player there in the future." 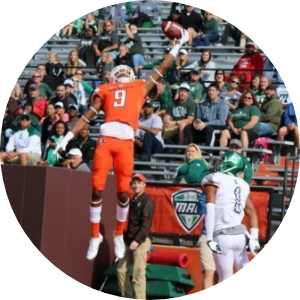