Sometimes things happen for a reason, for Brother Rice Senior receiver, Corey Lacanaria who had one of the best receiving seasons in the history of Brother Rice High School that could not be after receiving his first FBS offer from Ball State and one day later he committed to BSU. Lacanaria at 5'9" had college's question his productivity of what he could on his height. On the day following his offer instead of waiting for more Division offers, BSU was his first and only D1 offer, Lacanaria talked it over with his family before giving his verbal commitment to Ball State. Lacanaria will exit Brother Rice as the career leader in receptions (115), receiving yards (1,883)

Ball State has kept a program consistently strong due to the fact the coaches know that is ignored from bigger schools, in their own backyards. Three years ago, Ball State received the fax from Muskegon Heights WR Willie Snead who has become an instrumental piece of the Cardinals offense. The receiver allowed short drives for the MSU and UM coaches but they never wanted anything to do with a player who has caught 97 passes and 1,429 yards plus 14 touchdowns as a True Junior. Brother Rice is a lot closer drive for those coaches as well but ultimately is the same story just a different year.

Lacanaria missed two games this season due to an injury but still hauled in 65 catches, 1,111 receiving yards, and 8 touchdowns in 12 games which were both Brother Rice records. Mixed in between the stats 10 catches in week 1 vs. Nationally Ranked, St. Ignatius from Cleveland, Ohio and in the final game vs. Muskegon, a triple coverage key conversion catch vs. Ignatius, and the yards after the catch which have killed opponents. With the season and highlights that Lacanaria had, it was definitely a season to cherish. Lacanaria will enter with 8 records for the Brother Rice record book and 5 records for the MHSAA record book. Corey Lacanaria was able to discuss his commitment hours after making his decision.

First Game Started: game started was against North Farmington, first round in the playoffs my Sophomore year.

#1 Most Memorable Game: #1 most memorable game would be the state championship against Muskegon the first time.

Athlete you try building your game around: I try to build my game around Davone Bess and Willie Snead.

The D Zone - How does it feel committing to Ball State?

Corey Lacanaria - "Feels great committing to a high caliber team such as Ball State where they wing the ball around, I committed a day after getting the offer instead of on the spot because it was a family decision and we did a lot of thinking and communicating about this decision."

The D Zone - What stands out the most about Ball State?

Corey Lacanaria - "The winning program stands out about Ball State."

The D Zone - What have you enjoyed the most while visiting the campus?

The D Zone - What do the Ball State coaches like about the way you play?

Corey Lacanaria - "They like the intensity that I play with."

The D Zone - When the Ball State coaches found out you committed, how was their excitement level and what did they say to you?

Corey Lacanaria - "Coach Lembo was the first to know, he was thrilled say the least. He said that he wasn't even expecting the decision, so it was a spontaneous surprise I assume. The other coaches are probably finding out later and I'm sure they're just as excited."

The D Zone - After the great year you had, and not many schools extending offers to you, what did it mean this week when Ball State became the first FBS program to offer you?

Corey Lacanaria - "It took awhile, but Ball state becoming the first FBS program to offer me was an unreal feeling, I knew how they felt about the person/player I am, and them extending an offer to me shows that they think I can be very productive at the school."

The D Zone - This year on offense, it seemed you guys were always in rhythm. What was it like for you getting chemistry with Alex Malzone compared to last year when your brother, Cheyne was the QB and someone you have caught passes from since day 1?

Corey Lacanaria - "Nothing's better than a brother to brother football connection, but I knew Alex would step up and do what he needed to do. He was my QB back in league and I guess our chemistry carried on."

The D Zone - You have up with a massive highlight of big plays during your high school career, but is there ever a touchdown or catch you had, that you reflect on from time to time?

Corey Lacanaria - "My favorite play/touchdown was in the State Championship against Muskegon the first time when my brother threw a post to me for the first score of the game."

The D Zone - After 3 straight state finals for Al Fracassa at Brother Rice, he stepped down. What did it mean for you to be his final Senior class and send him out with a 14-0 record?

Corey Lacanaria - "I'm glad he could go out on top, right where he wanted to be."

The D Zone - What's in store for your future leading up to Signing Day?

Corey Lacanaria - "For the remainder of the winter I plan on weightlifting." 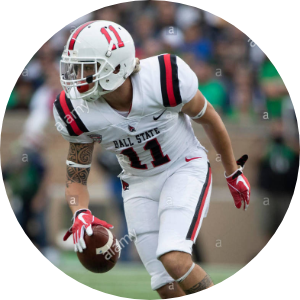