BIO - "Chukwuma Okorafor (pronounced chuck-WOO-muh oh-KOR-uh-for) and his family immigrated from Botswana to the United States in 2010, so he got a late start on learning football. Despite eventually getting recruited by football's biggest powers, he stayed in Michigan to play for Head Coach P.J. Fleck at WMU. Okorafor played as a reserve in 12 games in 2014, then started every game at right tackle as a sophomore. He switched to left tackle for his junior year after the departure of Willie Beavers for the NFL, earning first-team All-MAC honors for his efforts, using his wide body and length to protect the quarterback and blast holes for running back. Okorafor received numerous All-American accolades and a first-team all-conference nod for his play as a senior in 12 starts at the left tackle spot."

Overview - "Okorafor's size and potential will likely get him drafted earlier than where the tape says he should go. While he has plus physical traits, inconsistencies with balance and instincts could be a challenge to correct. He has the feet to handle speed rushers, but multi-move rushers could eat his lunch early on. If Okorafor improves his footwork and technique issues, he'll be a quality NFL starter at either tackle spot."

"He got started in football a little late but I still think he should have some of these issues cleaned up by now. He's big and he has talent so he's probably going to play early on." -- NFC team executive

Strengths - "Tremendous NFL size, Has thick, well-proportioned frame and carries it comfortably, Uses mass to clog lanes against stunts, Lands hands where he aims them in run game, Shows ability to snatch and torque defender out of the gap, Takes decent angles up to his second level blocks, Comes out of his stance with good, two-step quickness in kick slides and is able gain plenty of ground to the edge, Pass sets with flat back and keeps his head tucked out and off his punch, Patient when shooting his hands, Hands are strong and he's tough to deal with when he gets defenders locked out, Has natural power sit and anchor against a bull rush, Has power for proper redirects in pass pro or in run game, and Has started at both tackle spots."

Weaknesses - "Awkward coming out of stance as zone blocker, Gains almost no initial ground laterally allowing defenders a gap to shoot on backside, Base is very narrow for his size, Has limited lower body bend, Poor leverage makes him inconsistent as drive blocker, Struggles to change direction against active opponents, Topples off-balance in run game, Weight drifts too far outside on pass sets creating easier access for inside rush moves, Mirror and punch placement in pass protection needs work, Scouts complain he's "big and nice" when he needs to become "big and nasty", Instincts are below average, and Doesn't have a feel for what opponents are going to do." - NFL.com 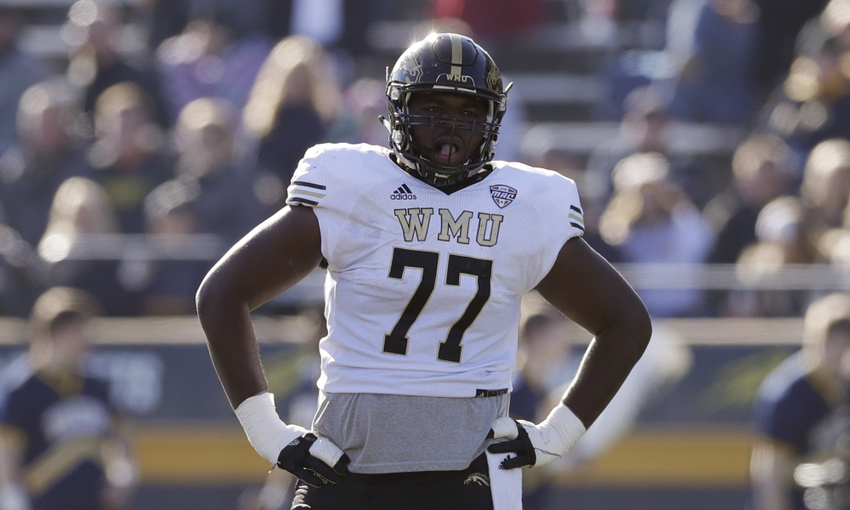