There are not many situations in life that are worse than what River Rouge 2019 CB/SS Corry Thomas had to overcome at 9 years old. Thomas witnessed his father being shot and killed right before his eyes on Corry's aunt's driveway. The young soon-to-be Sophomore lived to play in honor of his Father, while Corry's mother and uncles played a role in Corry's growth since the unfortunate incident.

Thomas possesses blistering speed for a corner and with the expertise of coaching by the 2015 Michigan High School Football Coach of the Year, Corey Parker - Thomas' future on the gridiron is looking great. Thomas contributed a lot on the Panthers squad that reached the Division 5 finals for the first time in school history. As Thomas was preparing for his first real evaluation in front of college coaches on Friday night, disaster struck again in the family. This time, it was Corry's, Uncle Brian who at just 34 years old died from a main artery being cut and the doctors were unable to stop the bleeding.

Corry Thomas received his first offer while at Toledo on Friday night, he then went and camped at Bowling Green State - earning an offer, and then on Sunday went to Eastern Michigan's satellite camp at Mumford High School, where the Eagles became the 3rd school in 3 days of camps to offer Thomas.

Coach Parker and his assistant coaches have pulled out a lot of moves in their time to better the student-athletes of River Rouge and that was the case again this weekend, as River Rouge's QB coach / assistant coach, Larry Johnson took Thomas and another Panther, Justin Knott down to Toledo. Thomas was the talk of the camp among coaches and it wasn't until later in the night once mostly all campers left that Thomas said that Toledo's head coach, Jason Candle offered him his first scholarship offer. Thomas described the moment he was offered, "My reaction was like wow I just thanked God and I thought about my Dad who passed when I was 9. I know he was proud of me!"

Thomas continued by saying what the coaches liked about him, "I ran a 4.43 forty and they liked my speed, quick instincts, and the way I compete!"

As he entered Toledo, Thomas mentioned he was extremely dialed-in, "when I walked into the Glass Bowl at Toledo my mindset was I have to do this for my uncle and I'm not leaving here without a scholarship and when me and coach got done talking, I pointed my hand up to the sky and said this was for him."

Despite the tragedy that struck, Thomas was able to overcome his immense sorrow and come out focused and was all smiles during and after the camp, "I thought I had a good chance to go earn an offer," said Thomas. "The mentality I had was just to focus on and make every rep count!"

Having such sudden and tragic events occur in his life, many people are shocked to see Corry Thomas standing so tall and strong despite being at such a young age, but Thomas credits his family and the sport for his foundation, "My mom and family helped me so much and I had to be strong for my little brother, but my Uncle Greg stayed on my head and pushed me to be better especially in school, he would just pop up on me and I used football to clear my mind."

Thomas paused, "Literally Football saved my life because I don't know where I would be at or what I would be doing if I didn't have football."

Through all of the struggle, Thomas' mother was also going through the loss of her husband while remaining strong and setting a fine example for her children. Thomas discussed how they handled the last few years together, "It was the worst feeling ever and when my mom told me I was the man of the house at 9 years old you really wouldn't think of it like that and once I hit 13 it really hit me because I had lots of responsibility but my mom helped me a lot and I really appreciate everything she does for me every time I've been in a bad mood she calmed me down and I really thank her for that."

Corry Thomas will be at the Detroit Sound Mind Sound Body camp at Wayne State this week, where several more colleges will see first hand how well he performed at; Toledo, Bowling Green State, and Eastern Michigan over the weekend. 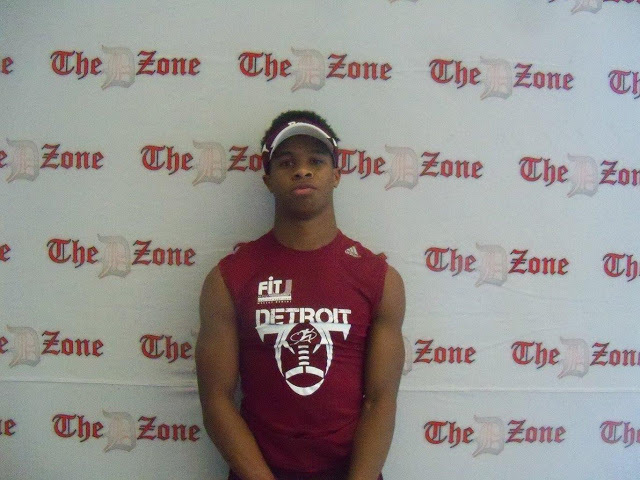