Detroit King / Pittsburgh CB Avonte Maddox graduated from high school in 2014 and played 4 years at Purdue. Maddox capped off his Pitt career with an incredible performance vs. the Miami Hurricanes as he logged; 8 tackles, 2 sacks, 2 tfl, and 2 pass deflections.

BIO - "Don't be misled by Maddox's smallish frame, he's proven himself a tough-minded defender since putting on his Panther jersey for the first time. Maddox was a third-team All-ACC selection as a senior, starting 10 games (missed two with an arm injury), making 27 tackles, four for loss (all sacks), intercepting two passes, breaking up 11 others, and forcing three fumbles. He also missed three games with an arm injury in 2016, but played in 10, starting nine for the year. He recorded 49 tackles, 8.5 for loss, 2.5 sacks, and led the team with three interceptions (one for a 33-yard touchdown) and eight pass breakups. Maddox was voted honorable mention All-ACC in 2015 after starting all 13 games, posting 75 tackles and a team-best three interceptions and nine pass breakups. The two-way Detroit Metro high school star (35-956, 14 TD receiving; 65-717, four TD rushing; four interceptions, two returned for scores) was an impact freshman for the Panthers in 2014, starting six of 13 games played, compiling 32 tackles and three pass breakups."

Overview - "Maddox is sure to get a glowing review from his coaching staff as he has been a model leader and worker during his time at Pitt. While he plays with good toughness and has good athletic traits, his ability to stay connected in coverage has been problematic. Inconsistencies in man coverage combined with a smallish frame will likely mean any path to a roster will be a bumpy one."

Strengths - "Possesses high football and personal character, Beloved by coaching staff for work ethic and attitude, Fluid and athletic in space, Has twitch to play the ball if he's hugged up on the route, Finished career with 51 passes defensed including eight interceptions, Team leader, Willing to play with pain, Takes tackling duties to heart, Solo tackler who doesn't need much help to get ball carriers and receivers to the ground, and Handled adversity well when he struggled on the field."

Weaknesses - "Gives away too much separation in early stages of the route, Needs better patience from press and off coverage, Almost too reactive to fakes causing him to lean out of position, Struggles to mirror and match from man, Can be a step slow to diagnose and transition from bail technique, Way too respectful and passive against receivers considering his speed and athletic ability, Feet get stuck in neutral when changing direction, Spry but small, and Has missed five games over the last two seasons due to injury." - NFL.com 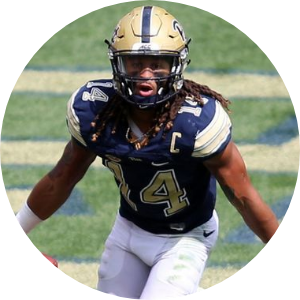