Buffalo gets their Quarterback in Tyree Jackson from Mona Shores (Story)

Tyree Jackson was offered on National Signing Day in 2013 by Ferris State, 4 months later after Buffalo evaluated Tyree they offered to become his first and only Division 1 FBS offer. Although Tennessee State (FCS) offered later in the week following the Sound Mind Sound Body, colleges throughout the country missed out on Jackson. Jackson led the Mona Shores Sailors to their first postseason appearance last season, with the ability to hurt defenses in the air and on the ground, Jackson was a key piece to the success. Jackson's Junior season showcased him throwing 2,568 passing yards and 31 touchdowns and shows a glimpse of what the 6'4" and 200 lbs QB will be able to accomplish in his Senior season and future at Buffalo. The Bulls had a weekend recruiting event and that is when Jackson was ready to make his decision, read below to see why Jackson chose Buffalo.

Intangibles: Size and can make all the throws

Blessed to announce my commitment to the University at Buffalo! #GoBulls pic.twitter.com/DGpBqggDpy
— Tyree Jackson (@TFball3) August 2, 2014

- Tyree Jackson describes his relief and timing of his commitment - "I wanted to take my time and research the university more and build a bond with the coaching staff, as well as visit and view the university before calling and making a decision."

- What Tyree Jackson enjoyed about his weekend visit - "I enjoyed being around the coaches, and the current commits such as Brandon Smiley, Duke Hwang, and Matt Seybert although he wasn't there we just text a lot and talk. The and academics are second to none and I'm just blessed to be able to further my education and athletics there."

- What Tyree Jackson enjoys about the Buffalo Coaches - "I love Coach Woods the QB coach/ OC's experience he's coached some of the greats such as Daunte and has coached on two NFL teams. It's a guy I feel I can learn a lot from. Coach Quinn has one goal championships and degrees, I also really like his family atmosphere."

- Jackson describes how he fits Buffalo's offense and similarities with Mona Shores offense - "I think I'm a lot more comfortable running the ball now, and UB likes their QB's to be able to run and pass, as well as stretch the ball . And our offense similar as in the QB has to make quick decisions and be able to drive the ball when the opportunity presents itself. And the QB has to be an effective runner as well as ."

- Jackson discusses the immediate future now that he is committed - "Now it's time to focus on my senior season and trying to lead my team to new heights and do things we've never done before. We have big goals as a team and with the commitment out the way I can go out and play free and not have to worry about colleges and what not. We want to win a state championship this year and I'm going to do everything in my power for my teammates. No more visits throughout my senior year. Just Buffalo."

- Closing comments - "Thank you for taking the time out to interview me, and I'm looking forward to another exciting year. Blessed to be where I am! Go Shores and Go Bulls." 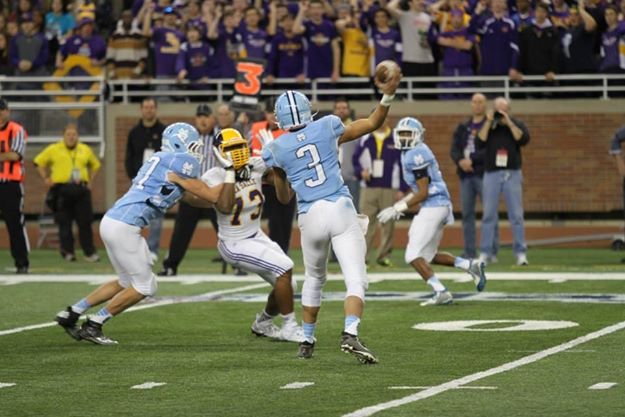