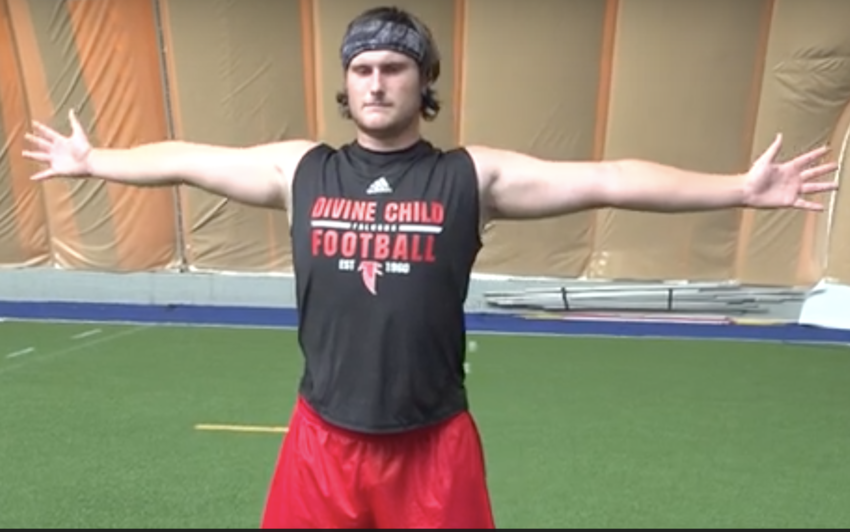 Colleges that have shown you interest:

I believe the first thing that will jump off the map at you is my size. Standing 6'5" tall, with a 6'7" wing span, as well as a 9 5/8" hand I have an imposing frame. Secondly, I believe that with another year of growth that my physicality will show on the field more than ever over the next two years. Lastly, I think that while I am very physical at the point of attack I won't cost my team penalties. I pride myself on staying as physical as I can be but within the rules of play.

I believe that the best word that sums up my play style is coachable. Every year that I play, I learn, I grow. Having the opportunity to play for some incredibly talented coaches at my position group I have been blessed with the opportunity to continue to change my game to fit the new style of play in an ever changing game. I love to learn and love to compete. I am never satisfied with what I know. There will always be someone that I line up across from that is bigger, faster, and stronger than me. My goal is to rely on my technique and dominate every snap.

Not everyone has the same opportunities that I have been afforded. I have been humbled to have the opportunity to play at Divine Child. Not only can I play one of the greatest sports on earth but I am able to do it at one of the best High Schools in the country (Divine Child High School). I was fortunate enough to be able to play varsity football as a Sophomore and do so in one of the toughest leagues in the state (Detroit Catholic High School League).

Looking forward and never forgetting the past is something that I learned early on. My High School career began just after DCHS went to a State semi-final and Regional final in back to back years. Remembering that while talent played a part in my our success the thing that stood out to me was the work ethic that those players put forth each day.

My goal is to leave my High School program better than I found it. After two years at 4-5 I want people to know that those years were not the standard but a blip on the screen of the Divine Child football legacy. As a player I want to be named All-Catholic, and All-State on a successful and winning program. Stars and accolades mean very little to me if my program is not successful.

It has long been a dream of mine to play football at the next level. Having an opportunity to continue my education while being able to continue to play the sport I love means the world to me. The opportunity to represent a University and continue to leave my mark on the world is something that I want to do. I also want to be able to give back to the community of which I am lucky enough to be a part of. Football goes beyond the game. There are so many that look up to football players and so many that are not able to do what I do. Spending time giving back is something that makes me happy.

If a coach were to look at this I would want them to know that what I bring to their program is passion and respect. My passion for the game and what it takes to play at a high level continues to grow. My willingness to do what it takes to make my team successful is unmatched. I also want them to know that I cherish the opportunity to play at the next level and my conduct on and off the field will always represent the University.

If you are Brady Ploucha, you may request access to edit and maintain this profile.