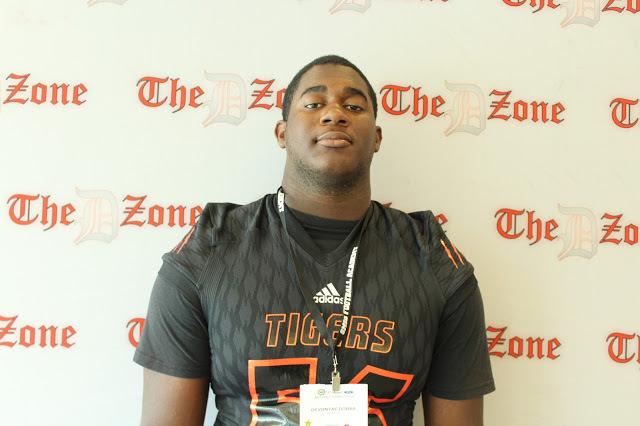 Belleville 2019 OT Devontae Dobbs received his 33rd offer from Clemson University this past Friday on a trip with 9 other top underclassmen from Michigan. The offer list includes mostly anyone who could seriously contend for the service of one of the top 2019 recruits in the entire country.

Clemson fresh off of winning the NCAA College Football Playoff waited until they saw Dobbs in-person before extending an offer. "It felt great, it was unexpected," said Dobbs. "Getting this offer helps me to create my top school list."

It wasn't until the end of his visit that Clemson extended an offer. Dobbs was able to soak in the facilities and campus prior and discussed his thoughts, " It was very shocking, all of the fun stuff that Clemson had to offer their players. The coaches were nice and had great hospitality."

Dobbs said he hopes to return back to Clemson for their huge week 2 game vs. Auburn as a Junior.

Dobbs earlier this year was offered by Georgia and Alabama, he would camp at both of the schools over the weekend and discussed his mentality coming in as a high priority for both schools, "My mentality heading into the camp was to learn and be coachable. I would have loved to learn more at Alabama though. At Georgia Coach Pittman really went into detail about my technique."