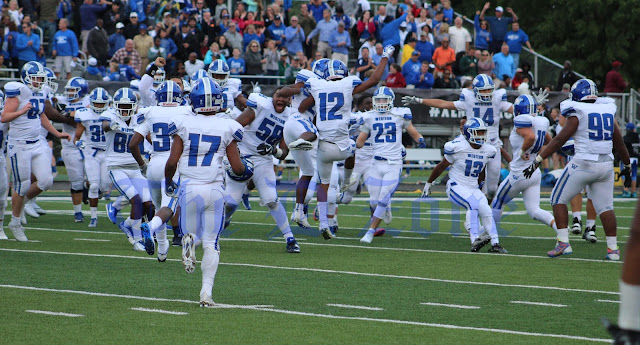 In a game that lived up to its billing, #4 Walled Lake Western defeated #3 West Bloomfield by the score of 19-14. The game was expected to have a shootout but both defenses were phenomenal and it would come down to the team who could make more clutch offensive plays.

Walled Lake Western capped off the scoring late in the 4th quarter with a 2-yard QB keeper by 2019 Sam Johnson III. The play was setup by a defining moment in the game when WLW was facing 3rd and 24, Johnson delivered a perfect pass to 2019 WR Kevin Jackson to move the sticks and 5 plays later Johnson scored.

West Bloomfield struck first about 9 minutes into the first quarter when Bowling Green State bound 2018 QB Bryce Veasley found Wisconsin bound 2018 WR A.J. Abbott for an explosive reception down the sideline. Veasley would then run it in from 4 yards out to give the Lakers a 7-0 lead.

The next scoring play wouldn't occur until the dying seconds of the first half when Johnson scored off a QB sneak and the score evened out to 7-7.

2019 K/P Aidan Jennings was a huge reason why the Warriors also came out on top Thursday. In the 3rd quarter, he added 2 short range field goals which were no doubters to give Western the lead at 13-7. Jennings throughout the game had several booming punts to switch field position and not allow the Lakers to make a play.

2018 QB Bryce Veasley and his West Bloomfield squad responded with a 51-yard rush and the very next play was a 3-yard touchdown run where Veasley ran through a Western defender on the goal line and the score would now be 14-13 West Bloomfield.

West Bloomfield had one last chance after Sam Johnson scored his 2nd rushing touchdown to regain the lead as they drove downfield. 2018 WR/TE James Faulkner was reliable on the drive as he was tough to stop up the middle of the field. The final play of the game was an incomplete pass that a Western play caught but was out of bounds setting off a raucous WLW celebration.

For WL Western there defense was phenomenal with a host of players having a big impact. 2019 LB Zak Kempster was all over the place and was involved in tons of tackles. Kempster along with Indiana State commit 2018 MLB Jon Moffett will provide the Warriors with a very solid LB duo.

2018 CB Randall Harris was also one of the best players on the field with several breakups and a near interception that would have surely been a pick six if not dropped. Harris accepted an offer from Central Michigan on Saturday evening.

Both Walled Lake Western 2018 WR/CB Justin Thomas and 2020 WR/CB Abdur-Rahmaan Yaseen were spectacular on both sides of the ball. Each had some nice catches offensively and made good plays on defense too. Thomas received his 6th offer after the game from FCS program, Morehead State.

Wisconsin commit Walled Lake Western 2019 WR Taj Mustapha had a few dangerous catches that moved the chains throughout the game.

Walled Lake Western's left side of the offensive line is extremely talented and strong with Michigan State commit, Spencer Brown at Left Tackle and Jake Dean at Left Guard. Both had impressive outings in the pass and run protection.

As mentioned earlier, 2018 WR/TE James Faulkner is extremely reliable in getting downfield and catching the ball. Faulkner was also lined up at DE.

West Bloomfield 2019 LB/DB Lance Dixon was involved in so many plays and went after the ball extremely well throughout the game.

West Bloomfield 2020 LB Cornell Wheeler had a massive game at Linebacker as the sophomore was involved in a ton of tackles throughout the game.

West Bloomfield 2018 DB Richard Sanders moved from Texas last year and missed his junior season but was all over the place defensively and made several great plays.

West Bloomfield 2018 FB/LB Shamar Dennis returned from an injury that forced him to miss most of his junior season and he had some nice blocks and also had a catch that resulted in a first down following a thunderous hit on a defender that freed up some running room on the Lakers final drive.