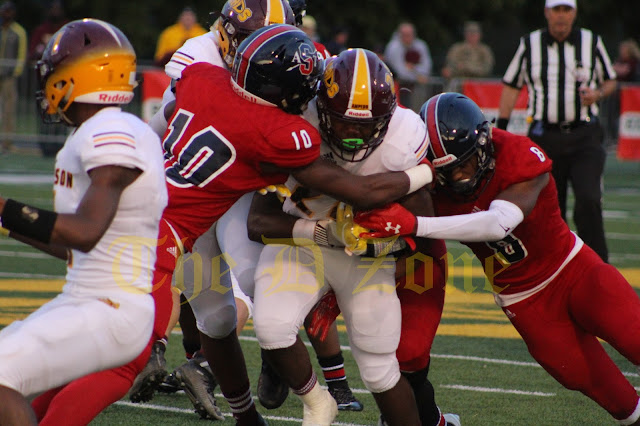 With the marbles rolling towards Southfield A&T's direction in the first half this game started to appear like it would be over at halftime, but that was not the case. Davison entered the half down 20-6 and following an anticipated horse-collar penalty on their sideline that wasn't flagged, Coach Kyle Zimmerman was ejected and it was a whole new Davison team in the 2nd half and 3 overtimes.

In the third overtime 2018 QB John Darby who had a phenomenal game running and passing the ball, rushed in for 6, but Southfield was unable to convert the 2 point conversion attempt.

Davison 2019 QB Cannon Hall who made his varsity debut was nothing but spectacular throughout the game with several tough gritty runs and was accurate overall with his throws saved his best for last.

Hall would find 2018 TE Garrett Goyette for the touchdown to even the score. Earlier in the first overtime, Hall missed an extra point that would have won the game. With the game on the line in the 3rd overtime the offense stayed on the field and 2018 RB Tariq Reid who had over 2,000 yards last year had his number called.

Reid who had 172 rushing yards and 4 touchdowns, would take the carry and meet a line near the goal-line. Before Reid could even cross the goal line, the entire Davison bench knew he was going to fall forward and rushed the field as Reid's body fell to the turf, cleanly in the end zone.

Reid was very complimentary of his offensive line who entered the game inexperienced, "My o-line just paved the way for me and my quarterback to have a good run game."

Southfield A&T performed great throughout the game with an incredible contribution from Central Michigan commit, 2018 Eric McArn who has struggled to be healthy but showed his true brilliance on Thursday. 2019 RB Anwar Jackson is a mirror image of McArn and was right there in production when McArn was on the bench. A third dangerous option emerged in 2018 RB/LB Blake Grice-Brunson who had several tough runs and was solid on defense.

Davison coach Kyle Zimmerman following his ejection commented on his quarterbacks first start, "Cannon Hall was the calmest dude in the building and when the game was at it's tipping point and about to fall towards the team in red, he led a 2nd half opening drive like he'd done it 100 times."

Tariq Reid on how the ejection had an impact on the team after halftime, 'The ejection most definitely lit a huge fire in all of us. At halftime we flipped the switch into kill mode and just said that we have to win games like this against adversity and being down."

Zimmerman continued on the resilience of his squad, "I've never been more proud of a group of coaches and kids, they didn't look for a reason to quit, they found a way. It's living proof that culture wins."

Davison had issues early with the speed of 2018 WR/CB Matt Gilbert who opened the scoring with a 72 yard touchdown reception for Southfield to even the score at 6-6 and later added an explosive touchdown run.

Southfield A&T 2019 S Marcus Fuqua was also incredible in coverage and run support throughout the game. Fuqua is going to be in discussion as one of the best 2019 prospects and certainly one of the best Safeties in the Midwest.

Davison 2018 LB Gabe Ellis was in midseason form as a tackling machine and was involved in a ton of plays, including special teams.

Davison 2018 WR Austin Roland also had a nice plays and had no issues getting open as well as solid perimeter blocking.