Today is the start of practices in Michigan and people like us who had a long off-season of watching off-season events are thrilled it's time to pad up. Friday was the sight of the UAW/Sound Mind Sound Body Media Day which featured over 100 players with Division 1 offers. Some of the players we saw once a month over the off-season, some for the first time, and some periodically. The D Zone spoke briefly on social media and initiating leadership in front of the participants. All relevant Detroit area media was in attendance. 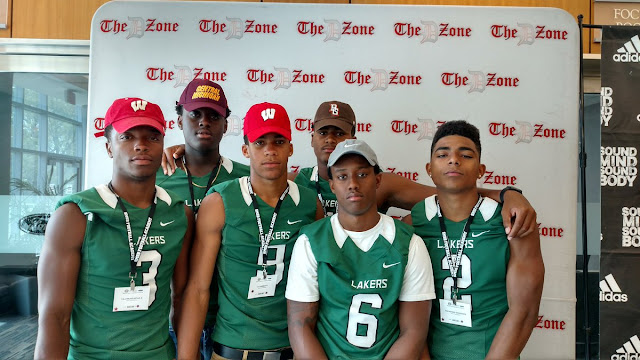 1. Belleville, Cass, and King are loaded, as well as future

- No other team in attendance drew more conversation with us than when a Belleville, Cass Tech, or King walked by and after a picture/discussion. The 3 programs have 32 combined Division 1 players on their roster.2021 OL Damon Payne is bigger than a majority of starting lineman in the state, Cass Tech 2019's Jaren Mangham & Jalen Graham are going to open a lot of eyes this year, and King's 2019 Tyrece Woods missed most of last year with an injury, it will be exciting to see him healthy as a junior. We could go on and on about the talent all 3 teams have.

- In terms of most offered players the Lakers are in the top tier, but that doesn't stop them from gelling as a team. We've seen OL Javon Foster hanging out with the team throughout 7on7 season which is rare for a non-snapping OL to just come out and support his team. Foster alongside 7 other teammates were in attendance and are ready for their showdown with Walled Lake Western.

- Cass Tech 2018 CB Kalon Gervin has an offer from just about anyone in the county, it's actually 46 which is half of Division 1 - FBS schools. No other prospect in the Class has drawn an equal amount of interest. Gervin was originally committed to Notre Dame, but decommitted. Many projected Gervin to commit to Virginia Tech, but a weekend visit in July to Alabama delayed that idea as he's sure to take a handful of official visits this Fall.

- In an off-season to forget about, Michigan State had several commits in attendance. None were bigger than last weeks commitment in Walled Lake Western 2019 OT Spencer Brown. Brown had over 20+ offers when he committed and was surely in line for more in the next 2 years.Belleville 2018 CB Davion Williams and Saline 2018 OL Dimitri Douglas held double-digit offers when they committed and don't wow you with their recruiting rankings, but each has the right mentality and will make an impact.

5. Oak Park's Maliq Carr will be a force this year

- Very few people outside of the dialed-in people know who the 2020 WR/S is at this point. Maliq Carr spent a lot of time in AAU basketball during the off-season so a lot of people just haven't seen him yet. He has the potential to be highly recruited in both sports, he admits he doesn't really know which sport is his future and he's young just enjoying the two sports he loves now. Carr has the speed and size to cause extreme problems for opposing defenses this year.

- East English Village vs. River Rouge is a huge week 1 game for both programs. For River Rouge it's a step in their journey of getting back to Ford Field, after being there 2 years ago, but in Division 5. Now Rouge is either D3 or D4 and doesn't need to sell their school to residents who in the past have gone to play in PSL schools, as Rouge is a firmly established program. East English & formerly Crockett is another well respected school who returns a bulk of seniors who will look to make noise in D2 this year. Everywhere possible this off-season EEVPA and Rouge players don't mind putting in a little trash talk with one another. The stage is set for an incredible game on the opening Saturday.

- The do-it-all player out of Big Rapids has very good blood in his veins as his family is extremely athletically gifted. Braeden Childress is the younger brother of Central Michigan WR Brandon Childress and has earned a trio of MAC offers. Childress announced his top 3 of; Central Michigan, Eastern Michigan, and Toledo a few weeks ago and had nothing but good things to say about all 3. He'll be looking closely on return trips to see how he meshes with the coaches.

8. No one understands how Brock Horne is offerless

- It was a pretty active season for the 2019 MLB out of Romeo, Brock Horne, but he's anxiously waiting for the communication period to open on September 1st. That's when juniors can really begin to communicate with coaches. Horne ran extremely good 40 times and tested well in the summer, on film the speed is apparent as he covers well. Sometimes it's a waiting game and that appears to be the case here as he'll finish somewhere in top tier of recruits in the Class of 2019 when all is said and done.

- In July, Belleville 2019 OT Devontae Dobbs announced he was trimming his list to 20 or 25 schools. Dobbs currently holds 34 offers and has 2 years left of playing high school football. Mostly all of his offers are from Power 5 schools, including; Alabama, Clemson, Florida State, Michigan State, Ohio State, and Oregon of colleges who have played in the college football playoff and a handful of other top teams. According to an MLive article, that list could be cut down closer to 15. Either way it's still very early with Dobbs and unless he has a single favorite school, he'll be taking many visits leading up to his senior season, plus who comes and goes in his recruiting process is tough to predict so early.

10. Army is getting a steal with Janeway

- Eisenhower 2018 DE/LB/TE Henry Janeway entered the off-season unsure of where he would be playing on the next level. He added the necessary weight to be recruited at a high level and it paid off. Janeway performed extremely well late in the year and now that he has filled up his frame more + improved on his skills, will be one of the most dangerous playmakers in Macomb. Janeway was described as a tweener months ago, so a huge senior season could continue to open more opportunities.

11. David McCullum is extremely under recruited

- For whatever reason not many eyes have turned to the impressive dual-threat QB of Waterford Mott 2018 QB David McCullum. McCullum received a Louisville offer during the 2016 season and they have remained his only offer. McCulum only described the Cardinals as his leader and didn't discuss specifics. Whatever the case may be, we'll be shocked to see another impressive season go unnoticed by other colleges.

- This wasn't the first event or camp this off-season that the UAW has played a significant sponsorship role in. For that we would like to personally acknowledge their role in supporting the young student-athletes in both Detroit and around the state of Michigan. Other major supporters of the UAW/SMSB Media Day are; Horatio Williams Foundation, Adidas, Top Cat Sales, and Xenith.